When Does Meat Stop Absorbing Smoke? 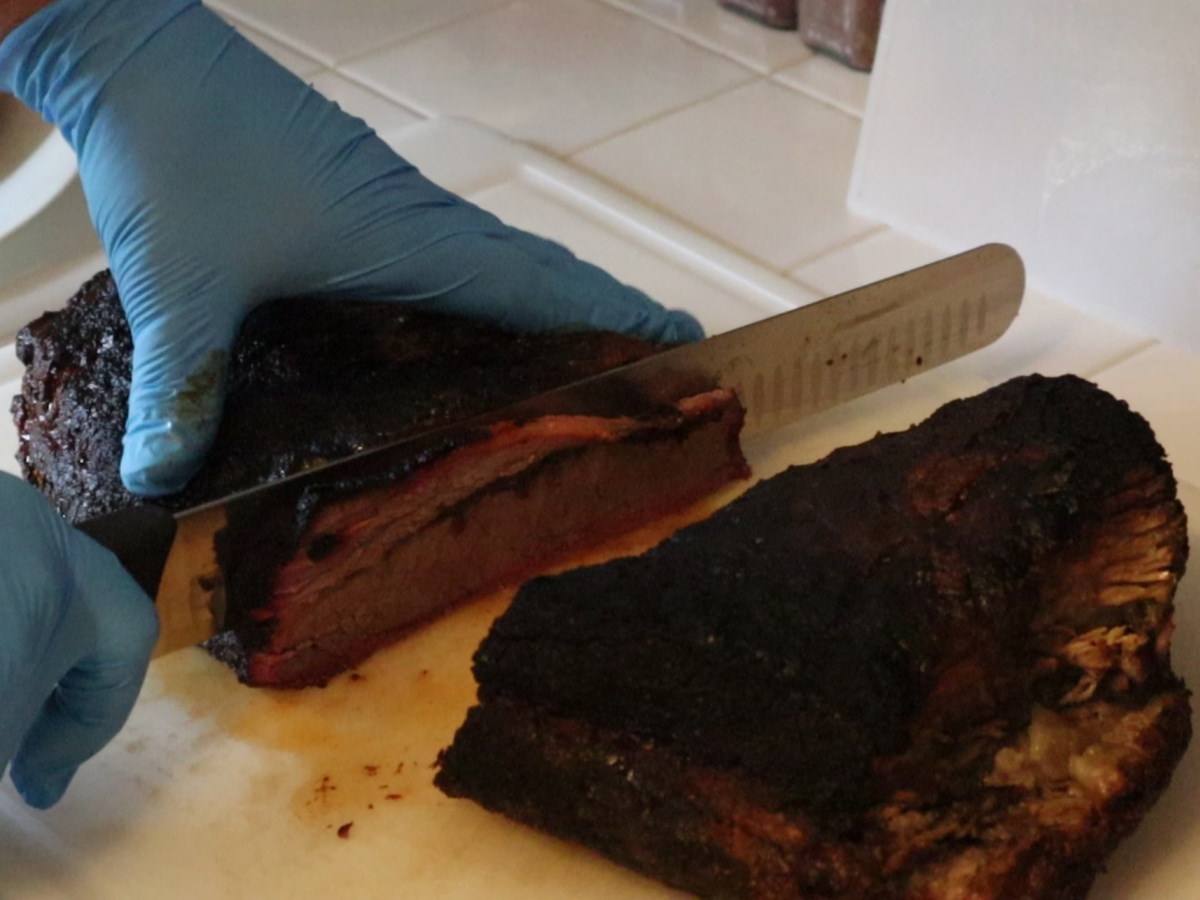 Smoking meat is an ancient and traditional art that still captures the hearts of BBQ lovers the world over. If you’ve done any kind of research on the topic, you’ve probably heard countless stories and instructions on how to smoke the perfect brisket or pork butt. But did you know that meat stops absorbing smoke at some point during the cooking process?

Meat will stop absorbing smoke when it is removed from the smoker. The smoke ring you often see on meat will stop expanding when the temperature reaches 170°F (76°C), which is when the myoglobin will no longer retain oxygen. However, the smoke ring’s size does not affect the smoky flavor.

Everyone who loves to spend a weekend smoking meat will have their secret tips and recipes to share. But knowing the science behind it will help you in the long run and save you time and energy. Let’s find out whether your meat cut stops absorbing smoke and at what temperature!

The art of smoking meat involves cooking at a lower temperature for prolonged time frames. Using long cook times won’t only kill any bacteria, but it will also give you a delicious consistency by breaking down the connective tissue in the meat.

During the smoking process, the temperatures in the meat will rise. When this happens, the pores on the meat are likely to close, which prevents the smoke from interacting with myoglobin (a protein found in meat).

You can see where the smoke has penetrated your meat when you slice into it. The color contrast you see around the edge is known as the smoke ring, which is the interaction of the myoglobin. This will occur up to around 170°F (76°C).

Though the smoke ring will not grow past this point, as the temperatures continue to rise and you continue cooking your meat for hours, the fibers will continue to absorb the smoky flavor for – as long as the meat stays in the smoker.

Also, the interaction of moisture turning to steam in the meat will change the rate that the temperature increases, which is the cause of “the stall”. However, that doesn’t stop the meat from taking on more smoke.

Let’s take a closer look at that smoke ring and how you can achieve it.

Smoking meat involves cooking it at lower temperatures and for longer time periods. When your meat is in the smoker, it will be subjected to smoke rather than to a direct flame. This is the crucial difference between cooking on a grill or smoking a cut of meat.

Confusing your meat’s smoky flavor with the smoke ring is an easy mistake to make, and many meat smoking enthusiasts use the smoke ring in their cooked meat to indicate its quality and flavor.

While it is nice to enjoy a cut of meat cooked to perfection, the smoke ring is not directly related to how smoky or well-cooked it is. While in the past, meat smokers could only base their knowledge on other people’s experiences and recommendations, today, science can explain a lot of the art of smoking meat.

Here’s all you need to know about the smoke ring and flavor.

What Is the Smoke Ring?

If you’ve ever used a smoker, you’ll know that they need lots of fuel – usually wood – and plenty of ventilation to allow for proper airflow. Fresh air comes in to help keep the fire going and also helps to remove some of the smoke and soot from the grill.

However, even with this airflow, the smoke circulating through the smoker will eventually start working into the meat, creating signs that set apart well-smoked meat cuts from low-quality ones. These include:

Commonly, the size of the smoke ring is associated with how smokey the meat will taste. However, the two characteristics are not as directly related.

Firstly, it is essential to understand that smoke is composed of tiny particles that react to water vapor and gases. When the smoke touches the meat, a chemical reaction happens.

Myoglobin, the protein responsible for the pink color of meat, reacts with the gases in smoke, including carbon monoxide (CO) and nitric oxide (NO), which are naturally created due to wood or charcoal combustion.

When these gasses penetrate through the meat, they react with the myoglobin that remains in the fibers after the animal dies (often visible as a red liquid that comes out of a fresh meat cut).

Depending on the amount of myoglobin and the oxygen present around it, the color of the meat will be different. For example, beef is of a darker red because it contains more myoglobin than chicken. And parts of the meat exposed to oxygen (such as the other surface) will be brighter red than in low-oxygen environments (such as in the more internal part of the cut).

When myoglobin is exposed to NO and CO, they will react with the iron inside. As the myoglobin breaks down – which happens at around 170°F (76°C) in beef – it changes color permanently, becoming a darker tone and creating the classic smoke ring.

Since these gases won’t penetrate too far through the meat, the internal part will only cook and take on a gray color. Because of this, the smoke ring will generally be between 1/8″ and 1/2″ deep (3.1mm to 1.2cm).

Our top recommended smoker for an easy and tasty smoke ring!

Check out the price on Amazon.com

As we have seen, the smoke ring will only expand before temperatures reach the 170°F (76°C) mark. However, this does not affect the ability of meat to continue taking in smoke.

Having a thick smoke ring will affect the smoky flavor if you remove the meat from the smoker early. Rather than having the smoker running all day, you can pull the meat out early and still get a lovely smoky taste if you have a well-set smoke ring.

However, if you leave the meat in longer, the smoky flavor will become more pronounced. Though the smoke ring will not grow, the inside of the meat will slowly take on more and more flavor.

How To Guarantee a Smoke Ring

The characteristic, mouth-watering ring just underneath the meat surface comes from:

How Long Does Meat Absorb Smoke?

As we have seen, the ring smoke is a nice-to-have feature of your smoked meat cut. However, this won’t affect the flavor of your meat. There is no time limit on your meat’s ability to take on smoke, provided it stays in the smoker.

When the bark (or the darker crust) is formed, smoke might struggle to penetrate through the meat. However, the outer surfaces will still be able to absorb smoke and take on a deeper smoke flavor.

In the video below, we do a test that you can do at home to verify our results.

Cooking temperatures and times affect the formation of the smoke ring but not the overall smoky flavor of your meat.

Supervising temperatures and cooking time are essential to achieve the consistency you want. However, what does impact the smoky flavor of a meat cut is the cooking method.

As mentioned previously, meat fibers will only continue to take on smoke for as long as they are exposed. Therefore, if you remove your meat from the smoker early and finish it in the oven, it will not have such a pronounced smoky flavor.

At the same time, if you decide to wrap your meat in foil, this might also impact its flavor – as well as its smoke ring – as the smoke will not have access to the meat and the myoglobin.

Lastly, you should always consider the benefits that a traditional smoker offers compared to an electric model. Electric smokers use different temperatures and timeframes, which can affect the results you will see.

Smoking meat to perfection requires a lot of practice. While following the instructions of professionals who have done it for years is a great idea, there are also some science-backed facts to keep in mind.

Since the smoke ring is caused by the myoglobin changing color and this process is inhibited by temperatures higher than 170°F (76°C), it will stop expanding beyond this point. However, there is no time limit to the ability of meat to continue absorbing smoke.

[…] brown butcher paper to aluminum foil. As long as you use this responsibly, it can be a great way to smoke your meat. Remember not to place the paper directly onto the grill, never use it for longer than 15 minutes […]

[…] best results, choose a harder cheese that is soft on the inside when smoked. Soft cheeses absorb smoke very quickly and may be difficult to handle. Also, a soft cheese can melt and spoil easily by […]

Cancel Reply
Is it Safe to Use a Pellet Smoker Indoors? - Pioneer Smoke House - February 10, 2022

[…] is a convenient tool you can use indoors. Small and compact, you can fill a small container with smoke and let it absorb the flavors while you work on your next […]

[…] At what temperature does meat stop absorbing smoke? […]